My Hilly Story - The Ups and Downs

First year rider and first year Hilly Hundred---all the ingredients that make up what I call myself…a rookie! My daughter says that I’m obsessed with my cycling. Whether it is going to spin class at the Y, or riding out on the road, I have found a sense of freedom when I’m one with the road and the outdoors. 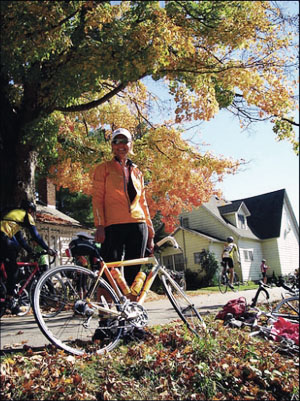 It all started for me about one and a half years ago when I found that I enjoyed the spinning class at the Jorgensen’s YMCA. What a great cardio workout and it didn’t hurt my knees. I noticed that the classes really filled up in the winter with all these biker guys who actually bike out on the road! I think someone even said to me that I should consider buying a road bike for the upcoming spring. The idea of that did intrigue me! Growing up and in high school, I was never involved in sports. I was extremely active in the music department and in college majoring in voice. I never physically challenged myself. Perhaps this would be my opportunity.

What I didn’t know is that I would be presented with an obstacle. In May, 2007, I was diagnosed with breast cancer. I found it myself and after the biopsy, it was confirmed…it was cancer. I decided to have a bilateral mastectomy with reconstruction as good prevention. I’m a dental hygienist, so you know I’m totally into prevention! After my surgery in early June, I was back to work in 4 weeks, but I was back to spin class even sooner! God blessed me with healing and early detection. It wasn’t in my lymph nodes and the doctors said no need for chemo or radiation!

After that summer, I began keeping my eyes open for a road bike. In fact, after hearing people talk about the Hilly Hundred in Bloomington, it was then that I made a goal for myself. I wanted to do the Hilly! Was I a total fool? I didn’t even have a bike yet! Well I ended up buying my orange and cream Trek bike (women’s specific) from Kathy at Koehlinger’s this past spring. I call it my dreamcycle and I love it!

During the summer months, I would usually ride once a week; do the local tours and a few club rides; while also taking my classes at the Y. My family and working part-time take up much of my time.

Getting ready for the Hilly was even a lot of fun, however expensive! I think I visited Koehlinger’s at least once a week to get all of my cold weather gear. The economy needed to hang in there so I could go to work just to pay for my new hobby!!

Finally, it was time to pack up the bike and go south to Bloomington…the weather even looked promising! I must say, I didn’t sleep well at all the night before.

I first arrived at Ellettsville High School on Friday evening…it wasn’t too busy or too crowded. The vendor’s tent was pretty cool, but I found I didn’t really need anything. I did get the mirror attached to my helmet. I waited all riding season for that!

The next morning (Sat.), it was time to get going. I had a nervous stomach, which made it difficult to eat. All I had was a banana and a glass of milk. It was great to meet up with the people from Ft. Wayne at the start/finish line…Luis, Corky, Keith, Cindy W., Jim B. and his daughter Kari (among others). We were all geared up and ready to start, but first we all took a bunch of pictures! These people are so wonderful-it gave me a sense of security to know I wasn’t there alone!

I think everyone had waited until Saturday morning to arrive— there were bikes and people everywhere!  It truly was amazing! The trees and southern territory were beautiful. The colors of fall were unveiled everywhere we looked…and yes, so were the hills!  I knew I would shift a lot, but oh my gosh! Before the Hilly, I had never even used my “granny gear” and as a rookie, you can bet I used it!!

The first big hill(s) was the Three Sisters. You see, these hills have names! I made it up the first ugly sister but going up the second, I felt like I was going to vomit! I couldn’t believe it! I got off my bike just long enough for my stomach to settle down and within a couple minutes, I was going back up. I made it all the way up, but I still felt queasy. After lunch I felt great, so I found out that not eating that morning really hurt me. The rest of the day went smooth. I couldn’t believe that the first sag came only 11 miles into the ride! To see all of the bikes lying around and all of the people in their brightly colored jerseys and yards and yards of spandex…it was really fun to take in! There was a different live band at every sag and each demonstrated their own unique musical flair! After surviving the first day, I was tired and beat. Luckily the Super 8 I was staying at had a hot tub!  I was in bed by 8:30.

On Sunday, we woke to frost and 37 degrees, so I added an- other layer to my gear. Actually, I felt OK. I made sure I got more to eat, but I still had to force it down. The air was crisp; however it was probably the better day.  The sun was smiling down on us! I had looked at the map before leaving and I made a mental note…Mt. Tabor comes after lunch! So I’ll be good after getting food and a nice, long stop. You see, Mt. Tabor is the biggie that you hear everyone talking about!  If you do Tabor, you’ve made it and that gives you bragging rights!  (King of the Hill…at least for the day!)

The Morgan-Monroe State Forest was my favorite… with all the gorgeous pines and spruce trees. Of course the down hills were a big rush too.  As a rookie, I did feather the brakes!

Lunch came and went. Now I could only imagine Mt. Tabor around every bend, around every grove of trees or hidden by the next curve. My stomach started bothering me again. Breathe Lynette! Finally I was riding next to a couple of guys that warned me,” Here’s the start of Mt. Tabor.” I geared down, sat back on my saddle and swore that I would not get off my bike. This was it- this is what I came here to do. As I climbed up Mt. Tabor and kept pushing down with my legs, I heard someone shout, “C’mon Lynette, you can do it,” and it was Luis cheering us all on! I made it to the top and got off my bike. I wasn’t that tired, but elated. I went over to the road’s edge and watched other cyclists coming up Tabor and I couldn’t believe I did it. The tears came and I thanked God for letting me reach my goal. THAT was the best feeling ever! I know that my fellow Fort Wayne rider, Cindy Wolfer, was just as proud of her accomplishments. After doing Tabor and getting back on my bike, the rest of the way was more relaxed and the scenery seemed even more alive. Oh, and my stomachache was suddenly gone! I did the Hilly Hundred and I accomplished my goal. WOW!

A veteran cyclist asked me upon my return what was the oddest thing I experienced at the Hilly, so here it is….you all know that to be really cool, everything has to match your bike. Right? You know what I’m talking about! On my bike, Sunday at the Hilly, I had an older man ride up beside me. In his one- sided conversation, with myself always looking straight ahead, he commented, “Oh my gosh, your jacket and everything matches your bike. Everything is orange. Is your underwear orange too?” I chuckled and sprinted on ahead … quickly. Later I was telling my cycling buddy, Jim, what the old guy said and he laughed and replied, “Doesn’t he know that we don’t wear underwear?”

Here’s to reaching goals and making new ones. This was my first Hilly…but it won’t be my last!